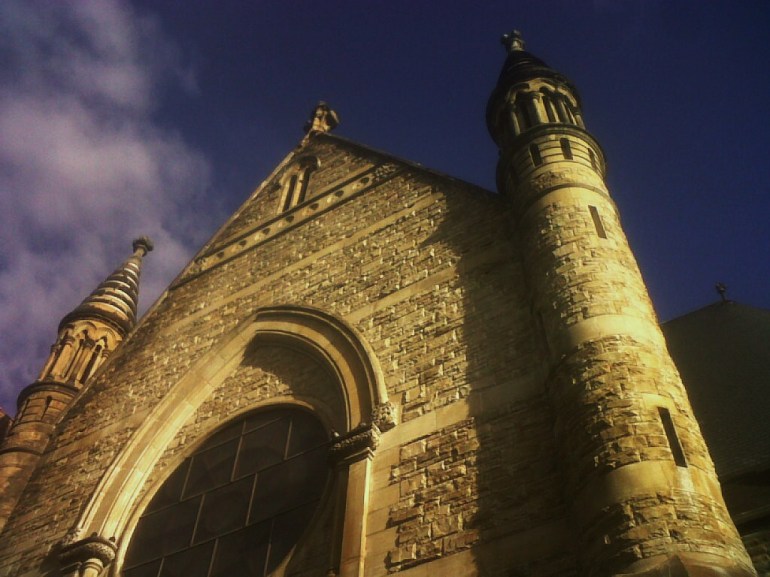 She closed the book, placed it on the table, and finally decided to walk through the door. She paused in front of a full length mirror and twirled around.  Her stomach churned reassuringly, convincingly.  This was it.  Everything was perfect.  She glanced at the clock.  Five more minutes.  It was almost a dream come true.  No, it absolutely was a dream come true.  In correcting herself a smile spread across her face.  It wasn’t her dressing room, borrowed quarters, that had been borrowed by women before, and would be again, by many after.  Heavily made-up, her reflection seemed foreign.  “Am I pretty?” she said aloud, her doll face blinked, a plastic smile unrecognizable.  Turning sideways she practiced posing for photos.  In her head she recited; “stomach in, back straight, shoulders back, chin down.”  She bared her teeth at her reflection, her lipstick was perfect.  A fleeting thought of how she would never have her first apartment by herself, and eat tuna from a can while standing in a kitchen, speaking aloud to no one, wondering how to do, what to do and why he never, was muted by a voice that reminded her “he will make an excellent husband and an upstanding father.”  Her veil floated back into place, and with fingertips cool on her forehead she patted her hair.  Closing her eyes she took a deep breath, sliding through space and time as she reached for the doorknob.  This was what she wanted.

He loved her cruelly.  In his own way she reasoned, for reason was the only way she was able to continue day after day, having nowhere to run to but always fighting the urge.  She knew that each provided for each other and that was the extent of their co-dependency.  Long lost were her ambitions of companionship.  She felt the comforts of tenderness only when he was struck by the urge to enjoy having another person nearby to comfort his needs.  Otherwise, she served purpose only; have a hot meal ready for him at certain times of the day, remove his boots, be agreeable with his opinions, and require nothing from him other than that which he was willing to share with her.  She learned to leave no trace of her existence, this and other things he taught her with impatience.  The depths of his selfish need to remain his only obligation conflicted with his desire to be a better person, so to compensate he spent many hours contemplating her stupidity to justify his behavior.  He found her to be silly and emotional.  He chopped wood to escape her presence.  The rhythmic thwonk of wood on the chopping block followed by the sharp crack of his ax splintering through reassured him of his capabilities.  He was the provider, it was rightful and necessary for him to make demands.  He didn’t need her, she needed him.  Really he was providing a humanitarian service by keeping her around.  He chopped wood for an hour.  His back burned, his muscles taught, he felt his strength surging from his shoulders down his arms and into his fingertips, underneath his knit cap sweat escaped dribbled slowly down the side of his face.  It seemed like a good time for a cocktail.  Upon re-entry into the house he glanced at her languid form stretched out on the bed reading, suddenly he had the urge to slam the beer bottle against the wall directly behind her head.  His eyes flashed, “how about a back rub later?”  “Sure baby,” she responded, “I made you a pineapple upside down cake,” he grunted in response.  She thought briefly that she hated him, but decided that it was a useless exhaust of emotion.

The nurse left work at five o’clock.  Always prompt about arrival and departure from her job, today would be no different.  Stopping first at the florist and then the butcher, then finally after picking up a bottle of champagne and a bottle of wine she headed home.  The sunset was a cotton-candy pink-and-butterscotch-yellow smear across the sky.  Her lips were set thin and straight in staunch refusal to expose her ebullience, but her foot steps bounced and her cheeks flushed.  On her bed, in shimmering anticipation, lay a long satin gown.  She showered quickly and stepped dripping, clean and smooth, onto the bath mat.  She wriggled her toes.  Her dark curls danced with nervous effervescence.  She slid the sapphire silk over her skin and painted her lips bright red.  Gliding through the front room she heard the potatoes sizzle in their aluminum encasing.  Her ears strained for the noise of footsteps as she lit the candles.  He probably won’t even notice the flowers she thought, fussing with the bouquet.  “Where Is He?”  An hour had gone by.  Any minute he will ring the buzzer she reasoned.  She shoved the steaks into the oven with a force particular of one who doesn’t want to be upset, but whose actions divulge.  In order to avoid wrinkling she stood poised in the doorway between two rooms.  Her rigid posture, a contradiction of  uncertainty and determined belief.  There was a sloshing-clinking sound and the champagne snuggled into the melting ice.  She studied her lacquered red fingernails.  Her lip twitched.

She was jolted from her stature by the acrid smell of burnt meat that filled her nostrils.  Smoke curled from the oven. Slowly, she reacted; turning off the stove, blowing out the candles, and walking stiffly into her bedroom.

The next morning she woke when sunlight pierced through her eyelids, as she lie wooden in her bed.  Oh yes, the Guggenheim, wasn’t today the last day of that exhibit?  She drank her steaming black coffee while staring out the window into the courtyard.  A couple of cats emerged from somewhere, as though they had simply materialized from the brick walls.  They rubbed their whiskers against one another and frolicked in the sun.  A few rats squeaked and scurried under the trees, separated from the cats by a chain link fence.  The cats then took up their post, daring the vermin to get within a clawed paws reach of the hunters, tips of tails flickering then erupting into a violent swishing now and again.  She tipped her coffee mug, draining the inky black liquid and decided it was time to get on with the day.  Stepping outside she was accosted by the brilliance of the sun, joggers and bicyclists clad in bright cotton and shiny spandex whizzed past her chasing health and happiness.  The smell of rotten leaves, raw grass, and the lingering remainder of dog poop hung in the air after a night rain.  As she walked through the park she tried to absorb the happiness of the day, taking deep breaths to fill the cave of emptiness within.

The car screamed and rumbled, slicing through the darkness.  A fat woman nodded off in a corner seat.  A tall man wearing headphones bobbed his head to a silent beat.  A blonde girl braced herself standing, intently involved in her handheld.  Outside, black velvet curtains smothered the windows and occasionally fluttered to the sides when the fluorescent lightening of another subway streaked past.  The train was crowded, although it was late.  In the corner a group of young women chatted.  Most of the people sat with earplugs tucked in, cell phones in hand, newspapers or books spread open; engrossed in their own distraction from reality. One seat remained unoccupied.  A tissue floated in a small puddle of mysterious liquid.  A tiled wall appeared harshly lit and shiny as the car slowed to a stop.  People rearranged themselves, shuffling and squirming as the doors opened.  A young woman sat cross-legged on the platform playing a guitar with the case open in front of her.  Crumpled dollars and coins splattered across the shiny velvet.  I mounted the stairs slowly, my footsteps retarded by the mass of people as we all moved simultaneously and separately.  I emerged onto the upper platform and the sound of music faded into a soft whine, first barely audible, then getting louder, and finally incessant and inescapable it filled the bustling subway station.  My eyes searched for the source. Wearing brown leather loafers, olive chinos, and a mustard yellow leather jacket with a scarf tied at her neck, stood a woman.  One eyelid drooped in her soft, leathery, sunken face.  Her feet moved back and forth although the rest of her remained obstinate.  She stood pleading  with her soft voice and watery eyes as everyone walked past her, and into the night.