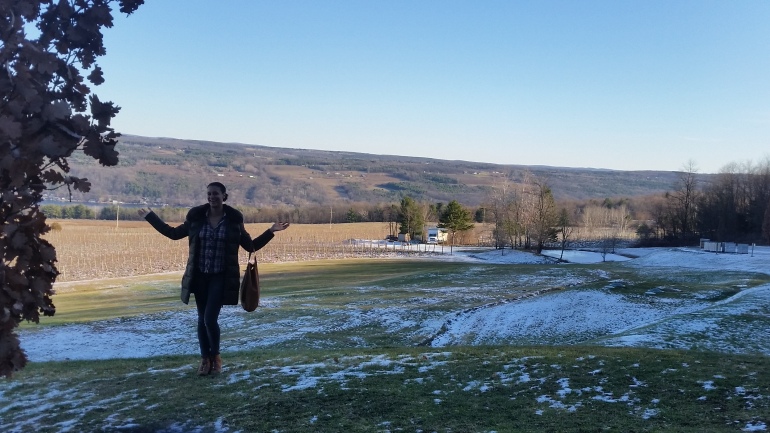 Take me out to the country.  Wine country, that is!  And New Yorkers have our very own. Glacial lakes carved into mountains over 500 million years ago form a vineyard region of New York known as the Finger Lakes.  Don’t let a little frost on the ground frighten you away.  One might typically imagine a day of vineyard hopping to be warm weather activity, but guess what, the wine tastes the same if not better!

The Finger Lakes Region AVA, a recognized American Viticultural Area, is comprised of four lakes: the Canandaigua Lake, Keuka Lake, Seneca Lake, and Cayuga Lake.  Geographically the Finger Lakes resembles another region known for world class wines and has drawn comparison to the Rhine in Germany; also with a cooler growing season, slate soils, and micro-climates caused by the mountains.  At the heart of the Southern Finger lakes, eight wine trail member wineries dot the Keuka lake in Hammondsport New York.  Known affectionately as “Lady of the Lakes” for geographical beauty, she holds her own against Piedmont in Italy, Loire Valley in France and America’s well known wine travel destination Napa Valley.  Keuka lake is also credited for being the birthplace of the Finger Lakes wine country.  Europeans brought with them to the new world, wine, and as far back as 1829 settlers began to cultivate vineyards.  By 1836 the first commercial winery opened.

Dr. Konstantin Frank  made a significant contribution to American wines when he planted Vitis Vinifera, bringing European vines to upstate New York.  He was determined that the cold climate was no reason to except mediocre wine and since then Dr. Konstantin Frank Vinifera Wine Cellars has become known internationally for exceptional Riesling, among other award winning grape varietals.  Other popular grape varietals which have seen success in the Finger Lakes include: Chardonnay, Cabernet Franc, Pinot Noir, Gewurztraminer, Merlot, and Pinot Gris.

What are you waiting for?  Plan your trip

“So much wine to taste and so little time”